In religious societies, like the one where I live, there are many people who have a moral objection to suing people.  They read scriptures like 1 Corinthians 6:1-8 and question whether they are justified in suing someone who has wronged them. I understand their hesitation, yet my livelihood depends on my ability to sue people in court and ask the judge or juty to give my clients justice.

The good news is, there is a ton of good that comes from lawsuits. People do not often see the good, so I wanted to share a couple examples from my personal experience. We recently resolved a couple different cases that brought about some positive changes in the world. 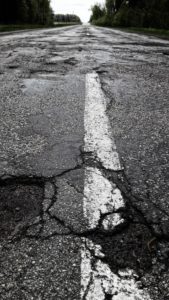 The first case was an accident that occurred due to a bad pothole on a roadway that was known to have recurring issues. The city had repaired it several times, but the patch jobs never addressed the real problem and the road continued to crumble. After filing a lawsuit, we were able to reach an amicable resolution with the city. Last week, our client sent us a picture of him standing on the freshly repaired road.  We responded, “You can feel good knowing that you helped force them to address it.”  The client’s response was, “I know! Great feeling.”

In another recent case, we brought suit against an assisted living facility for injuries sustained by an elderly resident.  After a long legal battle, our clients were insistent that one thing they wanted was an assurance that the facility would take measures in the future to prevent similar injuries.  The facility was also very concerned about the safety of their residents, and as part of a mutual agreement, the facility provided a letter outlining steps they were taking to improve safety that included training their staff to monitor similar situations in the future. The clients can rest assured that their willingness to stand up for their rights made it less likely that other people will be injured in the future.

These particular cases are not outliers.  These type of lawsuits make a difference! Not just for our clients, but for other people in the community. As lawyers, we are in a unique position to help make the world a better and safer place. We can do this by brining issues to the attention of those who can address and solve the underlying problems.